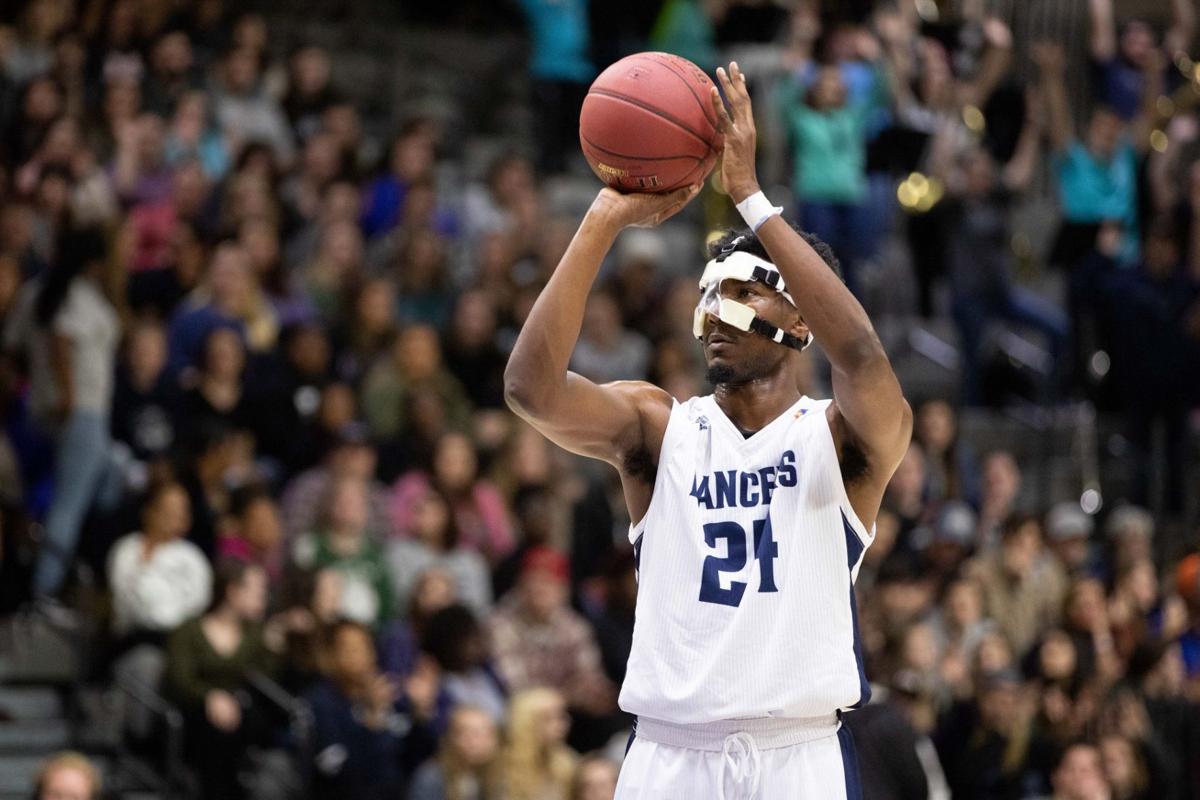 Geter taking a free throw with the protective face guard on after suffering a broken nose. 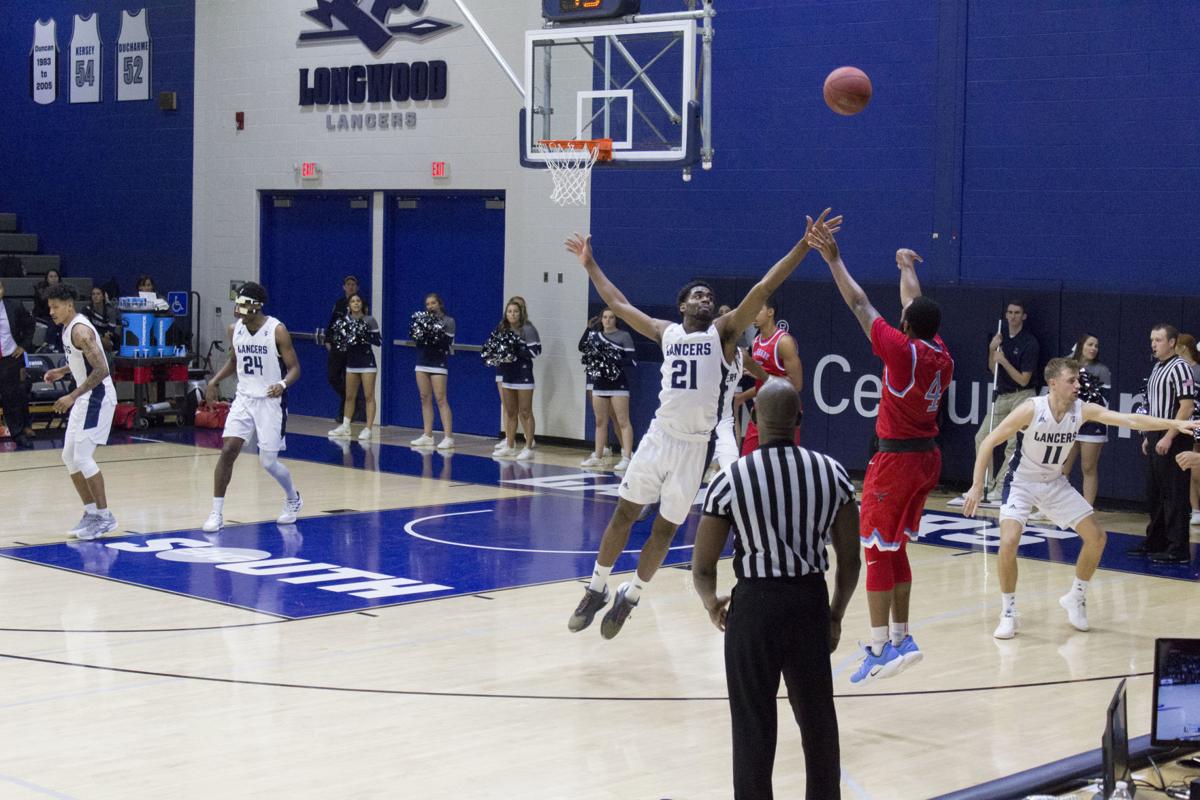 Geter protecting the paint and forging Delaware State to take one of their 32 threes Friday night. 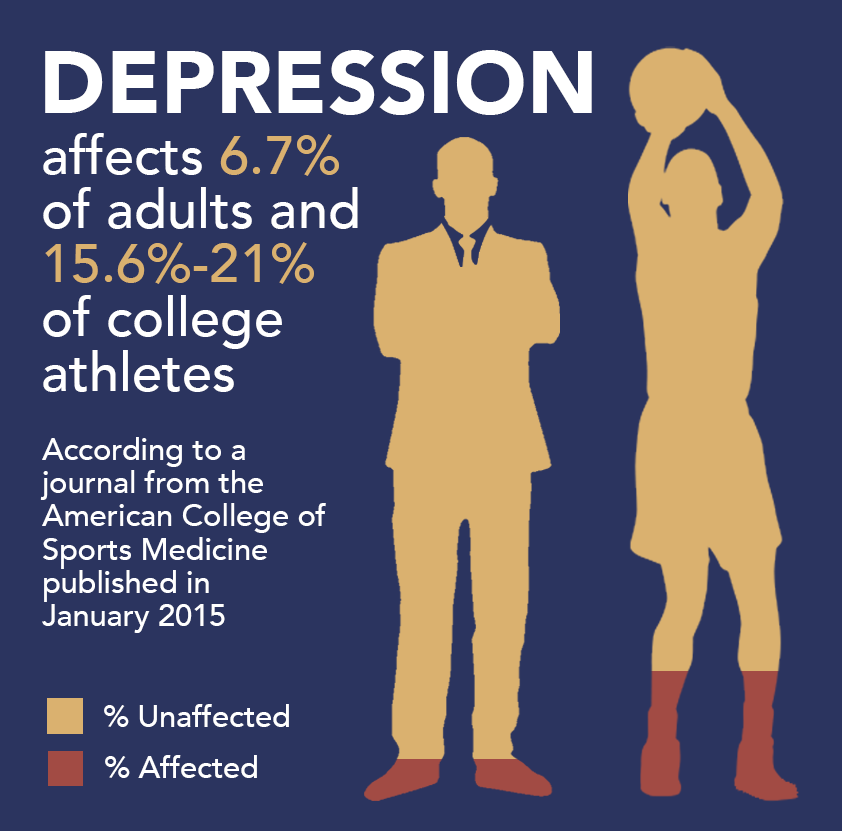 “I would say more than half of athletes suffer from some sort of depression or anxiety,” said Damarion Geter, graduate student on the Longwood men’s basketball team.

College athletes are often seen as the ‘big men on campus,’ wearing their team’s apparel the day after a big game. Recruited for their talent, some have their college careers paid for, and seemingly have it all. However, some athletes are hiding an internal battle, like Geter.

“On November 5th, right after halftime against the Hawks, I had a panic attack,” wrote NBA champion and five-time all-star Kevin Love.

These are the words of one of the game’s most talented forwards of the last decade in an article he wrote in The Players Tribune titled, “Everyone Is Going Through Something”.

“It came out of nowhere. I’d never had one before. I didn’t even know if they were real. But it was real — as real as a broken hand or a sprained ankle,” said Love.

Mental illnesses in the world of sports have gained national attention since Love’s article which broke the news of his panic attack at halftime of a game in early November. In the time following this, more players became vocal about their struggles off the court.

“The NBA gave me my depression,” former NBA player Nate Robinson said. “I’ve never been a depressed person in my life.”

Mental illnesses come in different forms, including depression, anxiety disorders, addictive behaviors and schizophrenia. Some people battle different forms, and they can vary. In addition, they have no boundaries, reaching Farmville where Geter has openly discussed his struggles with depression and anxiety.

“You lose interest in doing a lot of things, you probably want to be by yourself more often, and it’s a change in personality,” the soft-spoken Geter said. “Like you don’t feel like yourself and you feel empty.”

The causes of mental illnesses can be difficult to determine because they can differ. For Geter, he believes his was sparked by his battles with multiple injuries.

The Dayton, Ohio native tore his labrum and was forced to miss the 2015-16 season, and then took on a leadership role as a student assistant coach and began his rehab to return to the court for his redshirt junior year.

“Throughout life you’re taught (that) if you put the work in and you work hard, you’re always gonna reap the benefits,” he said.

That wasn’t the case for Geter, however, as when the next season came around, he was a starter for the first three games before suffering a foot injury in which sidelined him for a second straight season.

With these injuries and missed gametime, depression symptoms began to sink in for Geter. He used the analogy of a sinkhole to describe how “one thing leads to another, and another”.

Geter spoke of his desire to be left alone, and how it’s a dangerous one. He said it can lead to someone getting inside their head, thus creating a seemingly never-ending cycle of battling depression.

“Once you’re by yourself and those thoughts happen, there's no one there to encourage you,” said Geter. “You start to think about all the negative stuff that’s happened in your life before that has lead up to this.”

Having a support system helps cope with the constant feeling of loneliness, but pressure to perform up to their standards looms large for Geter. He said he has his family and friends who wants him to do well, along with other influential people in his life.

Geter’s depression is similar to that of Robinson’s, in which they believe they had their identity taken from them.

“Just because they play a sport it doesn’t diminish the possibility of them having mental health related issues, and in some cases we would see a higher risk of that,” said Rick Canter, Longwood’s associate athletics director for student-athlete enhancement.

According to a journal from the American College of Sports Medicine (ACSM) published in January 2015, “Depression affects an estimated 6.7 percent of today’s adult population in a 12-month period”, however, “findings from these studies suggest that the prevalence rate of depression among college athletes ranges from as low as 15.6 percent to as high as 21 percent.”

Geter said stress can lead to depression, having their own effects.

“It brought up a lot of anger, especially in the beginning,” he said.

He mentioned a time he was planning for an upper-body workout, but upon his arrival to the gym, his strength coach had made a low body work out for that day.

“It just set me off. It's those little things that go back to the personality changes,” said Geter.

It’s also rare to see athletes like Geter to seek any help in the process, where being a male is attached to being strong and not showing any emotion.

“Naturally, with male student-athletes I think that stigma comes up and you see that sometimes they’re less likely to want to address the issue,” said Canter.

This was seen with Geter, who didn’t show emotion to his family, saying he wasn’t very comfortable showing emotion. Fortunately, he sought out the help he needed.

“Honestly it was a lot on myself as well, just the fact that growing up you’re thought to be tough, and tough is not talking about your feelings,” said Geter. “Then growing up, I didn’t really talk much about my feelings, and I don’t even think my family back homes knows I went through counseling.”

Geter, with help along the way, has made promising strides in the right direction against depression and anxiety.

He said, “For me it was a long process, and I don’t know if its a process I’m fully over with yet, but I feel like I’m in a better spot with it.”