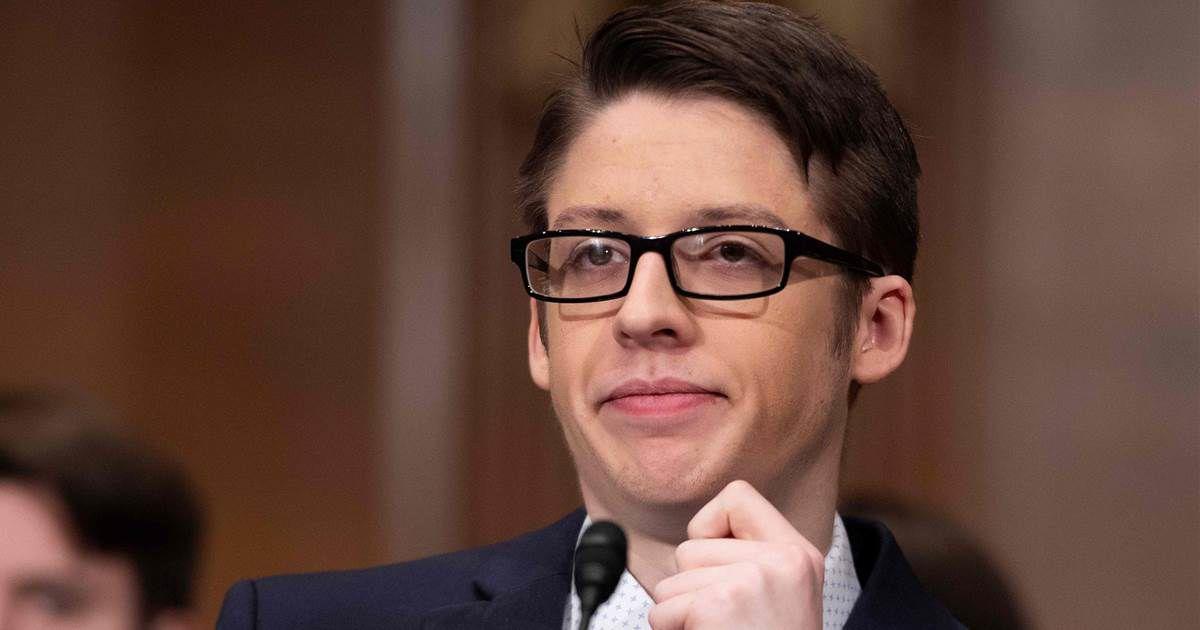 Ethan Lindenberger, 18, sits in on a congressional meeting and expresses that other parents should take initiative to stay informed and get their children vaccinated. 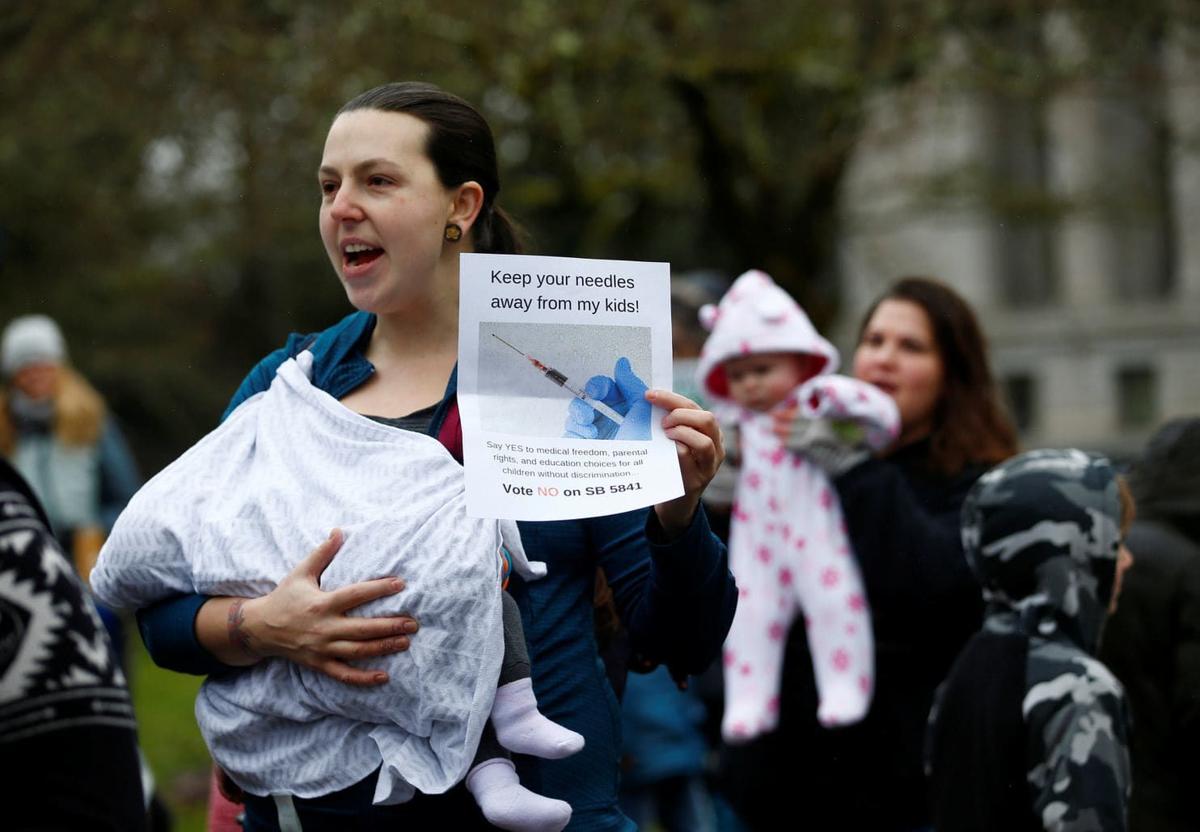 Parents in support of anti-vaccinations protest against a Washington bill that would remove their ability to opt their children out of receiving vaccinations.

Editor’s note: The opinions expressed in this commentary are solely those of the author.

When Ethan Lindenberger from Norwalk, Ohio turned 18, his first concern wasn’t his newfound eligibility to buy a lottery ticket or get a tattoo. Instead, Lindenberger was interested in using this rite of passage as a way to get vaccinated for the first time without his parents' permission.

The entire ordeal gained traction quickly due to the growing debates over people’s beliefs regarding whether or not their child should be vaccinated and whether that should be left for parents to decide.

Lindenberger’s mother, Jill Wheeler, made the decision to prevent him and his four younger siblings from getting vaccinated after she read online articles and posts stating vaccinations could lead to brain damage.

However, Dr. Neides’ research has since been debunked and the Center for Disease Control (CDC) has even stated vaccines do not cause nor are they linked to autism, citing a 2004 scientific research study by the Institute of Medicine (IOM).

He has continued to garner negative attention from those in the medical field for spreading misinformation to the public and eventually was forced to leave the Cleveland Clinic Wellness Institute.

Despite his departure from the Cleveland Clinic and this valid information being released by the CDC, many parents still reject the idea of giving their children the proper vaccinations they need.

What anti-vaccinators, known as "anti-vaxxers", neglect to realize is their decision of preventing their child from getting vaccinated can affect the other children around them.

The CDC lists one of the reasons the nation is seeing such an increase in outbreaks of this disease is due to “further spread of measles in U.S. communities with pockets of unvaccinated people.”

According to the Washington Post, Wheeler was so enraptured in these online comments that supposedly proved the danger of vaccinations to the point where her son’s decision to get vaccinated felt like a betrayal to her.

Lindenberger’s father, however, does not see the situation the same way, stating, “Hey, you’re 18, you can do what you want and we can’t really stop you.”

These discussions aren’t just happening in his home, they’re also taking place on a much larger scale.

On Mar. 5, 2019, a congressional hearing was led by the U.S. Senate Committee on Health, Education, Labor and Pensions was held, where Lindenberger played a significant role by explaining his reasoning to go against his mother’s wishes and advocating for parents to stay informed and vaccinate their children.

Furthermore, a recent judicial ruling that took place in Rockland County, NY barred unvaccinated students from attending school, on account of the unprecedented measles outbreak, according to US News.

This among other disagreements on a nationwide scale has led anti-vaxxers to protest, insisting it is their choice to not vaccinate their kids.

Specifically, in Washington, hundreds of people gathered to stand in support of their right to not vaccinate their children after Washington lawmakers proposed a bill that would prevent parents from opting out of vaccinations for their children under the age of 18.

This is due to a similar outbreak of the measles that occurred in the state earlier this year and is still occurring and spreading.

However, many of these protesters still believe vaccinations are more of a threat to their children than the measles.

It’s evident the battle between the two sides will not cease any time soon, but what’s important to note is those on both sides each want what’s best for their children.

To do so, we need to protect the future generation by giving them the proper vaccines.

If not, more children will die and more vaccine-preventable outbreaks will occur.

We need more advocates like Ethan Lindenberger, who has seen both sides of this debate and chose to help make a difference by sharing his experience as an unvaccinated child and educating the public on the dangers of being unvaccinated.

Overall, parents should stay informed and work actively to assure their child remains in good health, to further prevent the spreading of diseases and illness and, most importantly, death.

There should never be another case where children aren’t receiving the proper vaccinations and subsequently, falling ill and where parents fear autism more than they fear the loss of their child.

While it may seem obvious to some that parents should vaccinate their children, the issue is a little more murky than the clear cut presentation. This centers around the use of governmental force to achieve public policy. Unfortunately anti-anti-vaccination claims are used to steamroll bona fide religious objections to vaccines. Also unfortunate is the tendency of some anti-vaccination parents to use a religion as a convenient cover without adhering to the rest of the religion. A sensible policy proscription for anti-vaccine parents is not to force them either at gunpoint to have their children vaccinated. Neither should we have a laissez-faire approach due to the enormous benefit of vaccines to society. What is the issue with unvaccinated children? They pose the risk of infecting or being infected by other children. Thus we impose the following requirement--if an entity open to the public wishes to maintain medical records in accordance with HIPAA, the entity may forbid a person from their premises when an illness the person is not vaccinated for rises above the baseline rate in public health surveillance. This partly solves the problem for the public. Entities choosing to incur the costs of tracking vaccinations for their clients (such as childcare and schools) provide the benefit that most people want while retaining the option for a school or daycare that would cater to anti-vaccine parents the option to provide that service. This would serve to segregate the vaccinated from the un-vaccinated in times of a bona fide public health issue. It also imposes a convenience cost on parents--at a random time you or your child will be barred from a place for your decision. This would also have the effect of forcing a cost-based decision onto anti-vaccine parents. Rather than have the rest of society bear the social opportunity costs of not vaccinating, they are individualized and focused on the decision-maker. Now some will object to the child being subjected to the decisions of the parent in this regard by arguing that for the child's safety that they ought to be vaccinated against the will of the parents. The parents are the expression of the will of the child until the child is able to reason and express their own will. By violating the will of the parents, such coercion violates the will of the child. By making vaccines across the board mandatory, society is making the argument that government gets to make the medical decisions of the individual. I would be very wary about making such an argument.