Longwood University has grown over the years and has not only become co-ed but also more diverse as the years go by; however, there is still a disparity and lack of diversity in Longwood’s sororities and fraternities. 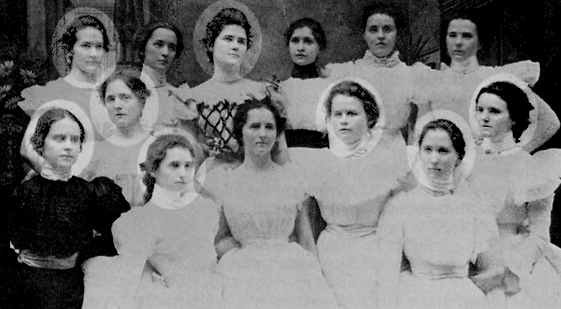 The founders of Tri Sigma, where all alike in appearance, due to the sign of the times and the lack of diversity or integration in colleges and universities back in the 1800s.

Editor's Note: The opinions expressed in this commentary are solely those of the author.

Last week, I was aimlessly scrolling through my phone with my friend across the room when she pointed something out to me that I’d only ever thought about internally.

Without peeling her eyes from her phone screen she asked, “Why is Caleb* the only non-white guy in his frat?”

I looked up at her with a slight frown and went to go look for myself.

She had a point: Caleb was the only non-white guy in his fraternity and, though his inclusion was something that should be celebrated, it also made me think about the lack of diversity in not only fraternities but also sororities.

Attending college is a way for young adults to discover themselves by exploring their interests, building their skills and making new, life-long friends. A way that many aim to do this is by joining clubs, sports and other organizations like fraternities and sororities.

These organizations should be a welcoming place where students of any background, religion, sexuality, ethnicity or race can thrive and feel accepted. More often than not, they are.

However, unlike clubs where one is able to join based on similar interests, or sports where one’s admission is based on their skill and merit, a person’s admittance into Greek Life is left entirely up to the opinion of those who are already members.

Looking closer at sororities and fraternities across the country, it’s no secret a lot of them are homogeneous, consisting of predominantly white individuals.

This makes some wonder if there is a sort of subconscious bias for these members to pick potential new members who mirror their own appearance.

Lawrence Ross, author of “Blackballed: The Black and White Politics of Race on America’s Campuses", gives a possible reason as to why this is so.

According to Ross, “Greek organizations resisted class and race diversity. Frats were a way for white upper-class men to separate themselves from an increasingly diverse student population.”

Now, in 2019, we are still seeing little diversity being integrated into sororities and fraternities.

Seven years ago, Crystal Stallworth attended sorority rush at the University of Alabama.

According to Marie Claire, Stallworth, who is biracial and mixed with black, was an over-qualified candidate. However, when the time came for Stallworth to find her home away from home, she was only asked to return to one of the sorority houses.

Other girls who had a similar work ethic to Stallworth’s, but were white, were in high demand.

As the school year went on, Stallworth realized the reason she was dismissed by so many of the sororities was due to her race.

”That was the point I realized, whoa, people still do see race here,” she said in her interview.

Of course there are nation-wide sororities and fraternities that are, in fact, the opposite. Greek life organizations like Alpha Kappa Alpha Sorority Inc. and Alpha Phi Alpha Fraternity Inc., predominantly black organizations, were founded in 1908 and 1906 respectively due to this lack of inclusion.

Even with minority sororities and fraternities present on campus, it is still possible for these members to face exclusion or discrimination from other predominantly white Greek Life organizations.

A member of Longwood's Alpha Kappa Alpha Sorority Inc. Haleigh Pannell still faces discrimination for being a part of an all-black sorority.

”I often hear that AKA isn't a 'normal' sorority and that hurts my feelings immensely. It (makes) me feel like the sorority I am honored to be a part of, isn't considered on the same level as others.” said Pannell.

However, despite facing this negativity, Pannell is still proud to be a member of AKA, stating that if she had been a member of a predominantly white sorority, she would struggle more with self-acceptance and "things like (her) natural hair."

Though, students like Pannell are able to find a home in Greek life where they can thrive, what we must keep in mind is this problem is more than just a black and white issue.

What about Asian-Americans or Latinx individuals who would also like to fit into a sorority or fraternity, but are dismissed based on differing looks?

At Longwood University there were 5,074 enrolled students, according to a 2017-2018 study from College Tuition Compare. Of those students, 3,764 were white, 522 were Black, 253 were Hispanic, 65 were Asian and seven were Native Hawaiian or Pacific Islander.

This means that roughly 847 students have the potential to join a sorority or fraternity but may also face discrimination because they do not have a similar likeness to those already involved.

However, what more sororities and fraternities need to start doing is being more aware of their implicit bias and working to integrate more people of color and people of different backgrounds into their organizations.

Pannell says she thinks a form of blind application would be helpful in implementing more diversity into sororities and fraternities.

"Just looking (to see) if that person meets the requirements of a sorority should be what the organization should uphold," said Pannell.

Not only would this benefit sororities and fraternities by getting to know someone who they’d otherwise not talk to, but it also gives every Greek Life organization across the nation the boost they need to start being more inclusive.

(*Name has been changed for the sake of privacy and publication.)

The statements about any Greek organization being inferior are rightly to be condemned especially so on the basis of race. However, the accusations of racial discrimination are a little premature.

This is the conundrum, whether the case of racial homogenity is due to simple demographic and personal preference or systematic racism. While the proportions can be exactly the same in both cases, the corrective measures are radically different.