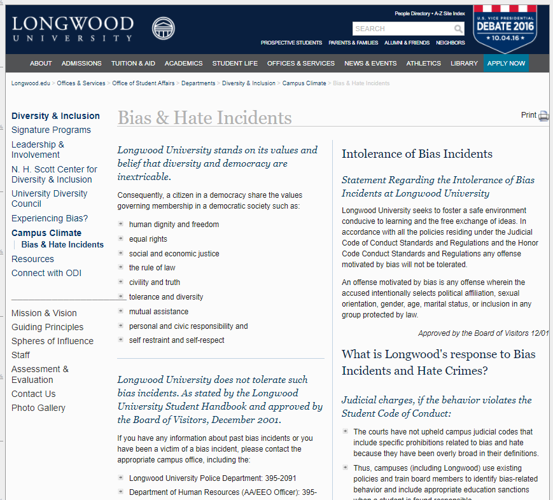 This is a screenshot from of the university's previous bias incident reporting protocol. The web page was archived.

Due to freedom of speech concerns raised by a student toward the end of the spring 2017 semester, Longwood University's bias incident reporting system has been temporarily suspended from use and removed from its website.

Director of Citizen Leadership and Social Justice Education Jonathan Page said the first draft of Longwood's new bias incident protocol was submitted to Vice President of Student Affairs Dr. Tim Pierson to undergo its first round of review and revisions in early November. Without the protocol in place, Page said his office has continued to listen and address issues of bias brought forward but hasn't had an official system to record the data.

In the spring, Page said the student believed the protocol infringed on an individual's right to freedom of speech. Following the concerns, Page said Assistant Attorney General Cameron O'Brion advised the university to remove the former protocol and provided recommendations for revision.

"A lot were based in how we were not only defining bias and hate crimes, they really didn't fall in line with how the FBI defined hate crimes, that a lot of the things we defined as bias incidents were really freedom of speech issues," said Page. "Some of the language that we modeled came from some private institutions and so as a public institution we can't have the same stance that privates do."

Before a new bias incident reporting system is implemented, the new protocol must be approved by Pierson, the president's office and O'Brion.

Pierson deferred commenting on the system until the protocol has been finalized.

After multiple attempts, The Rotunda was unable to receive comment from the Virginia Office of the Attorney General in time for this report.

Longwood's protocol provided a three-pronged definition of bias incident, stating it involved "conduct, speech, or expression that is motivated by bias or prejudice, does not involve a criminal act, (and) may, however, violate campus codes or policies."

Page said a few of the examples of bias provided by the protocol included the intentional posting of disparaging words or threats on social media, the use of racial slurs and epithets and the use of gay as an insult, among others.

The previous bias incident reporting system had also drawn attention from the Foundation for Individual Rights in Education (FIRE) who flagged the system in its 2017 Bias Response Team Report published in early February. FIRE is a non-profit group created to sustain constitutionally-protected individual rights on college campuses.

Page said the system was never meant to be punitive or judicial in nature, stating the system had two main purposes: aid as an educational tool and in campus climate data collection. He said the new reporting system will outline its purpose more clearly and clarify its definition of an incident of bias.

"The intent is not to sanction someone or prevent someone from making certain statements because a lot of it is protected speech or protected expression," he said. "But you kind of get into some of the ethics of behavior and language that just because you can doesn't mean you should."

In terms of recording incidents, Page said the data collected by the system would allow the university to survey "what's going on on campus" when considering police changes or understanding if how campus looks will accommodate the entire student population.

When redrafting, Page said he researched the structure of the bias response protocols crafted by other public institutions in Virginia.

“any report of a threat or act of harassment or intimidation – verbal, written or physical – which is personally directed against or targets a University of Virginia student because of that student’s age, color, disability, marital status, national or ethnic origin, political affiliation, race, religion, sex (including pregnancy), sexual orientation, veteran status or family medical or genetic information.”

"an action taken by an individual or group that may involve, but is not limited to, verbal abuse, assault, damage to property, sending of threatening mail or e-mail, writing racial slurs or graffiti, stalking, verbal harassment and other bias-motivated behavior that contributes to or enables an unsafe and hostile campus environment."

University of Virginia (UVA) defines a bias complaint as "any report of a threat or act of harassment or intimidation" against an individual based on their status in a protected class before providing the university's discrimination and standards of conduct policies as well as both the federal and state definitions of hate crimes.

A protected class is a group of people legally protected under federal law from discrimination based on a certain common characteristic, like race, national origin, sex or veteran status.

UVA states its definition of bias bears no any "independent sanctioning weight or authority," but is provided for statistical purposes and reports of such incidents are reviewed to examine if any violations to university policy were made. Their protocol also detailed the steps taken following the submission of bias incident report.

Virginia Commonwealth University (VCU) has formed a bias response team of staff from its Dean of Students Office, Office of Multicultural Student Affairs, University Counseling Services and Office of Student Conduct and Academic Integrity. The university states the team convenes to address formal bias complaints and review if the incident violated university policy.

Its protocol adds that even if a bias incident doesn't violate the law or university policy, the complaint may result in other responses, like educational programming in buildings or emails to students.

Before its removal, Page said only two official reports through Longwood's system had been made in 2016.

"Across higher education, there's always a reluctance to report when incidents occur. Some of it is guilt, shame, embarrassment, certainly not wanting to draw attention to it," he said. "Some of it is a fear that nothing will come of it, that I'll report it, but it's not going to change anything."

When a new system is introduced, Page said the university will try to raise more awareness about the reporting option for issues affected all aspects of campus, from race to religious to political intolerance. He hopes to see the system approved and placed on the website by spring 2018, so it can be a tool used to create dialogue.

"There are always going to be problems, but what makes a university or any kind of workplace environment a great place is the opportunity to have a discussion when we have disagreements," he said. "When incidents arise we can talk about them."

It is true that reporting system should be strong. I was having the idea of getting information of reporting in professional writing services and I found this blog. It is really a good and creative way to understand the way of developing reporting. I like this blog very much.