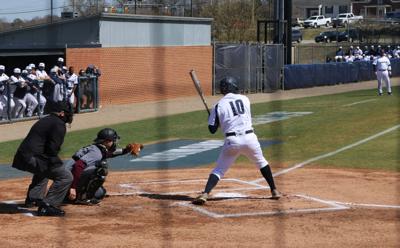 Longwood baseball is making history this season with a roster that is almost unheard of in collegiate athletics. The 2020-2021 season’s roster features 39 total players but the majority of them, 20, are listed as freshmen. That is nearly double the amount that Head Coach Ryan Mau’s team would typically have. And what makes these 20 freshmen even more unique is that you can divide them into two groups: True freshmen and COVID freshmen.

True freshmen: college athletes who begin competing in games in the beginning of their first academic year. COVID freshmen: athletes who were granted an extra year of eligibility form the NCAA because of COVID-19, and made an appearance in at least one game in the 2019-2020 season. The current Lancer’s roster has 11 true freshmen, and 9 COVID freshmen.

Seventh-season head coach Ryan Mau said, “Obviously from an eligibility standpoint they are considered freshmen, and in my mind, they are all freshmen, if they don’t get an opportunity to play a full spring season, they don’t get that experience.”

That experience includes not being able to play under the pressures of conference games, not playing in a college tournament, and not consistently playing under the lights at Buddy Bolding Stadium when the record is on the line.

COVID freshman and second baseman Eliot Dix said, “Being a COVID freshman is a unique situation because you’re a freshman, but you’re really not… there’s a lot of things we didn’t experience, but we also got a whole year of creating relationships with the coaches, a whole year of practicing in the fall and spring, and lifting in the weight room.”

Dix has made a name for himself this season. He leads the team in batting average, homeruns, RBI, and slugging percentage. As a two-time Big South Freshman of the Week; Dix has consistently ranked in the conference’s top 10 in batting average. He said the roster is filled with a lot of “hungry guys” who might have less experience but make up for it with the “heart and passion” they bring to the game.

Experience definitely has its role, but according to true freshman Hayden Harris, the mindset of the athlete is just as important. “The biggest thing was just to compete honestly. Competing with whatever I was doing, whether it was hitting or fielding.”

Second baseman for Longwood this year, Harris was unable to play his last high school season because of the pandemic, but has become a “spark plug” for the program according to Mau. “Hayden is playing really sound defense for us; he’s producing at the plate and coming up with some clutch hitting when needed…we love what Hayden’s been able to do at this point.”

Harris’s contributions for the Lancers have been clear, because whenever he has played, he has started. Out of their first 30 games, he has played and been in the starting lineup for 28 of them. Harris said he has high expectations for himself and the season, “I put stress on myself so much where I expect myself to do a lot.”

Mau said, his expectations that are on the freshmen as a whole aren’t unrealistic, they just want them all to progress athletically and academically, and to be able to contribute to the program on the field. But Mau also sees advantages to coaching this many freshmen.

Mau also said, “They don’t know in a good way… they come in with a lot of energy and the unawareness of how crucial situations are, so therefore they play more relaxed and more aggressive, and have a tendency to really deliver in those situations.”

As the season is winding down, Mau feels the players have had “a ton of opportunities” throughout the season to get acclimated to college baseball. “I’d like to see these young guys take all that experience and quickly show their capability of being impactful for us down the home stretch.”

True freshman Dylan Saale is certainly delivering from the mound. No freshman pitcher has been called to deliver in more situations than Saale. As of April 22, the average for innings pitched by majority of the freshmen was 8. Saale has pitched 28, making him top 5 on the team. As the season began, he wasn’t sure where he would be in the rotation. Saale said, “Not knowing my role at the start of the year and trying to prove myself to my teammates was a big obstacle.”

To Mau, Saale is now considered the “#1 starting pitcher” at the tail end of the season going into conference play. Which according to Saale has been a real “confidence boost.” For him, it’s all about setting your standards and working to achieve those goals, “I can’t settle, I always have to be better.”

For Dix, looking back at the pandemic impacted 2019-2020 season, in which he played a total of 17 games before the season got taken out from under them. He said last year’s team was “robbed,” and it was “heartbreaking” to have the rest of the season gone in a matter of seconds. Dix said it has only helped fuel the team’s desire to make a real impact on the 2021 season.

With over half the team getting their first full collegiate baseball season under their belt, Mau believes the future of the program is bright.

Mau said, “We’re young, but we’re full of fight, and we’re going to learn and grow from some of the bumps along the road that we’ve experienced.”